But I skipped lunch!

It's after school and the kids really want ice cream...and I skipped lunch, so I'll just have this milkshake. It can't be as bad as if I'd eaten a meal, right? Or, instead of my normal sandwich and fruit, I'll just grab a salad at the nearby restaurant. Better? Or, I didn't eat everything on my plate, so I couldn't have had too many calories. Does this sound familiar?

I feel duped. And sabotaged.

I'm a chronic label reader, as you know. But what if there isn't a label? More and more restaurants are now including nutrition labels on their menus. But what about the ones that don't? Do you know what you're eating?

Men's Health recently reported that Cold Stone Creamery's PB&C milkshake has 2010 calories -- "the equivalent of 68 strips of bacon or 30 chocolate chip cookies" -- 68 grams of saturated fat (131 total fat grams) and 153 grams of sugar. WHAT?! Not that I've ever had one of these, but I'm sure I've had something similar somewhere along the way. Unbelievable. And is it really THAT good? I'd not only have to skip lunch, I'd have to not eat for two days to justify this type of caloric intake. And there really is no justification for all that saturated fat. The magazine states that their information is from Cold Stone's website, so I looked into it and it checks out. I did have to dig through layers of pages to actually get to the nutrition chart, but it's there. WOW. Not one milkshake has under 1000 calories. And on the preceding page, the company brags about their commitment to our health and their fresh ingredients.

I'm not going to go into further detail, because then I'd have to be fair and critique every chain. Just trust me when I tell you that I have looked into these places, and it's appalling. I used to order the "low carb menu" steak and blue cheese salad at Panera Bread, until I realized that the LUNCH SIZED portion had over 1,200 calories! Lucky for us, magazines and newspapers are starting to expose the ugly truth. It's really no wonder we have such an obesity epidemic in this country.

So digest this -- The Center for Science in the Public Interest just released their study on nine dishes to avoid, Xtreme Eating 2010. We all recognize, I hope, that fast food, fried food, desserts, and obvious "junk foods" are going to make us fat and unhealthy. But what about those items that we believe -- falsely, I might add -- to be fresher and healthier? The organization describes California Pizza Kitchen's nearly 1700 calorie Tostada Pizza with Steak as the equivalent of eating "a Pizza Hut Personal Pan Pepperoni Pizza topped with SIX Taco Bell Crunchy Beef Tacos." Ha!

I know, this is no laughing matter. They go on to report that P.F. Chang's Double Pan-Fried Noodles Combo has more calories than 10 eggrolls and 7,690 milligrams of sodium -- 5 days worth!!! The Cheesecake Factory's Pasta Carbonara with Chicken has 2,500 calories and 85 grams of saturated fat. More saturated fat than we should eat in four days, and terrible even if you only eat half.

Next time you're out, remember that nutrition information is based on a recommended 2000 calories and no more than 20 grams of saturated fat PER DAY. Not per meal. And if you're dieting, this number should be a lot less.

Maybe you're a foodie who avoids chain restaurants like the plague. Still, I wonder how much cream and butter those 5-star chef's are using? Most chefs care about your taste buds, not your waistline. Unfortunately, there is so much bad food out there that I could go on and on. Eating out is a danger zone for dieters. It's ok for a special treat once in a while, but any more often is certain diet sabotage. And the problem appears to be getting worse.

So my advice is to cook and eat at home. You'll save a fortune, you'll have a better grasp on your intake, and it's not that difficult. Most of my recipes come together in less than 30 minutes -- and I know that to be true only because I usually decide what we're having for dinner just when I'm about to drop over from hunger.

But what if you're craving that milkshake? You just have to have it? Instead, have mine. It takes just minutes to make and it only has 250 calories. Keith and I like these so much that sometimes we skip lunch or dinner and have this treat instead! 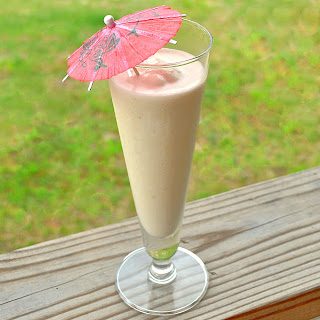 Puree in a blender until smooth. Done. If you want a thicker shake, slice and freeze the bananas first (maybe you already have some in there after reading my last post!) and you can skip the ice altogether.

For an entire month's worth of diet-friendly recipes, The Svelte Gourmet: A Month of Main Courses cookbook is available at www.thesveltegourmet.com/products.html. Enjoy!
Posted by The Svelte Gourmet at 9:43 PM

This is very interesting story, little funny but as the true one it's nice that you got the right thing on right time.

Yeah, I haven't eaten out in what feels like years. I think last summer on vacation I had seafood out once or twice, but other than that I really just prefer to eat at home! I feel more in control that way and it's a lot cheaper, even if I were to use expensive ingredients!
The milkshake looks delicious. :)

Thank you, Sophia, I just submitted it! I have another one to submit, as well -- "Faux"jitos, my svelte version of the mojito. I appreciate all of your compliments! 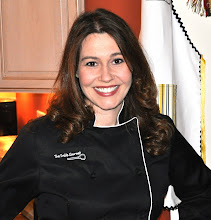 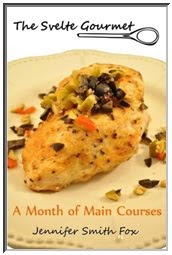